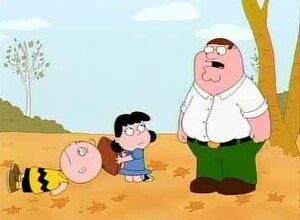 Peanuts is a syndicated daily and Sunday comic strip written and illustrated by Charles M. Schulz, which ran from October 2, 1950, to February 13, 2000; the day after Schulz's death, continuing in reruns afterward. The strip is considered to be one of the most influential in the history of the medium, with 17,897 strips published in all. It chronicles the adventures of unlucky boy named Charlie Brown, and his dog, Snoopy.

In "Brian in Love", Brian is recalling his dream, based on Logan's Run. When Brian is caught, attempting to be a "Runner", he points to Snoopy and claims he should be in his 50s.

In "E. Peterbus Unum", when the guys are saying what they got with their tax return, Charlie Brown, dressed unconvincingly as a ghost, said "I got a rock", referring to the Halloween special where he kept getting rocks instead of candy.

In "Ready, Willing, and Disabled", Stewie groaned like Charlie Brown when the money clip was claimed, his face becoming nothing but a wide open mouth.

Peter visits adult versions of Peppermint Patty and Marcie in "Stuck Together, Torn Apart", who have been interpreted as being lesbians.

Peter claims he has to destroy Mel Gibson's film, The Passion of the Christ 2: Crucify This in "North by North Quahog" for the good of Snoopy and all of the other children's characters.

After he is fired from his job at The New Yorker, Brian encounters a “No Dogs Allowed” sign, hears a booming voice enforcing the rule and then lays on top of a doghouse. This parodies the Peanuts character Snoopy in the 1972 film Snoopy, Come Home.

Charlie also appears in "Mother Tucker", grown up and behaving abominably at the Peanuts reunion where his guest is a coarse skanky crackwhore. He breaks down in tears because Snoopy and Woodstock are dead, the strong implication being that he had supplied the drugs to them which led to their demise. He makes things worse by claiming that he doesn't care about Woodstock, but that Snoopy did not deserve it.

In "No Meals on Wheels", Violet Gray and Pig-Pen see Stewie who is running Lucy van Pelt's psychiatry stand.

When Herbert gets a bath from Meg instead of Chris in "Play It Again, Brian", he exclaims "Aww rats!" in the same manner as Charlie Brown.

In "Love, Blactually", both Brian and Stewie dress as Snoopy for a costume party. Brian is followed by Woodstock after deciding not to go out with Jane.

Lucy pulls away a football from Charlie Brown and is kicked by Peter in "Brian's Got a Brand New Bag". Lois also kicks Lucy in "Lethal Weapons".

When Stewie tells Chris that he can't always get things right in "Turkey Guys", he sets up a cutaway of Snoopy's "original "Happy Dance"" in which Snoopy does a bump and grind against Lucy.

In a Target Department Stores-sponsored advertisement for The Peanuts Movie, Stewie appears dressed as Charlie Brown with Brian as Snoopy.

In "Married...With Cancer", Brian notes that he hasn't gotten so much attention since attending The Peanuts Movie, leading to a cutaway gag where he is identified for peeing in a soda cup at the theater. He lets out a cry similar to Snoopy's at both this revelation and in the end when his new bride that he has come to loathe, is still alive after he thinks she has choked to death.

In "Customer of the Week", Lois responds with "good..." when it appears there is no evidence tying her to having caused Lisa's peanut allergy. Noting Lisa's mother watching her reaction, she quickly amends this to "good grief", and acknowledges it as something Charlie Brown would say.

In "80's Guy", Doug challenges Stewie to a race to the top of the jungle gym to retrieve his frisbee in front of a gathering of kids including Charlie Brown's crush, the little red-haired girl. Stewie notes that he values her opinion more than any of the others, but she dismisses that as he only was interested in her to wear her ballerina skirt.