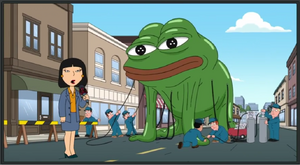 Pepe the Frog is an internet meme. A green anthropomorphic frog with a humanoid body, Pepe originated in a comic by Matt Furie called Boy's Club. Pepe's image has been appropriated as a symbol of the controversial alt-right movement, with The Anti-Defamation League adding certain incarnations of Pepe the Frog to their database of hate symbols. In addition, Pepe's creator has publicly expressed his dismay at Pepe being used as a hate symbol.

Pepe is one of two new balloons for a parade in "Pawtucket Pete", with the other being a figure of Brian as 'Hops the dog.'

Retrieved from "https://familyguy.fandom.com/wiki/Pepe_the_Frog?oldid=209266"
Community content is available under CC-BY-SA unless otherwise noted.