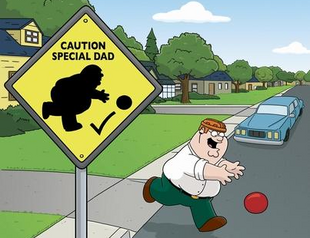 Plot: The Griffins invite the neighbors over for game night. While they are playing Trivial Pursuit, Lois gives Peter the Pre-School Edition questions to let him have his moment. After winning the game, Peter is an insufferable boor and starts talking down to everyone. Brian can’t take it and challenges Peter to apply for the MacArthur Genius Grant to prove he is in fact a genius. When the test results come back, however, it turns out that Peter is actually mentally retarded. 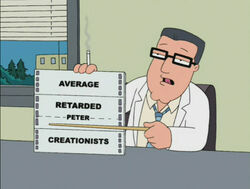 Peter is depressed about this until he accidentally runs over Tom Tucker. Tucker is mad until he sees that it’s Peter, the retarded fellow, who ran him over, and lets him go without calling the police. Peter realizes that being retarded means he can get away with all kinds of inappropriate behavior and he quickly takes advantage of his newfound power, in ways such as kicking doors open in the women’s restroom. Unfortunately, while trying to steal a deep-fryer from a fast-food restaurant, Peter pours hot grease all over Lois and while she is in the hospital, Agent Jessup from Child Protective Services takes the children away because Peter is mentally unfit to be a parent. Cleveland takes custody of the Griffin children. 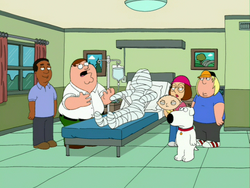 Brian tells Peter that he just has to show that he is a good parent. Peter thinks that the best way to do that is to show what a bad parent Cleveland is, so he brings seven prostitutes into Cleveland’s house. This doesn’t work as Agent Jessup sees through the plot and Cleveland orders Peter and five of the prostitutes out. Peter is given a trial as to why he should get the kids back. A heartfelt plea in trial fails and Peter barely avoids imprisonment.

Peter and Brian are at home lamenting the fact that the Griffins will never be a family again when Lois walks in and Peter finds out she is completely recovered. To Peter's joy, Lois got the kids back, and will smell like french fries for the next 6 months.

Retrieved from "https://familyguy.fandom.com/wiki/Petarded?oldid=216391"
Community content is available under CC-BY-SA unless otherwise noted.