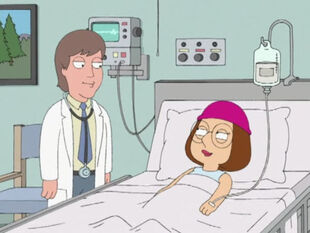 Peter's Daughter
After Meg gets injured, Peter promises to treat her better.

Plot: It begins to rain heavily at Quahog, which soon begins to turn into a flash flood. As a result, the entire ground floor of the Griffins’ house is filled with water, and they need to evacuate. Before the family can do so, however, Peter makes Meg go into the kitchen to get a case of beer and a sandwich, but the refrigerator is mostly submerged. Meg is forced to go underwater, where her blouse snags onto one of the fridge racks. As she begins to drown, Peter goes into the kitchen and rescues her, but she is unconscious. 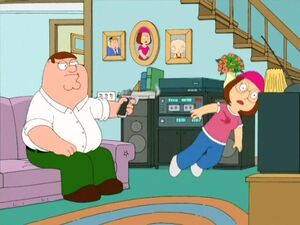 At the hospital, the family is informed that Meg has fallen into a coma, causing Peter to reflect on all the horrible things he’s done to her in his life, and promises to make up for it if she ever recovers. She eventually does awaken, and Peter begins making good on his promise by showing her extra kindness and promising to do whatever he can to make her happy. However, when Meg announces that she wants to start going out with her new boyfriend, Michael, a med student at a hospital to whom she awoke, Peter grows very distrustful and overprotective.

Lois suggests that Peter talk to Michael and get to know him better rather than drive him away. He does, and then allows Meg to go out. However, Peter still feels distrustful of him and spies on them during one of their dates. Michael feels uncomfortable and feels that he should break off their relationship, which makes Meg feel very upset. 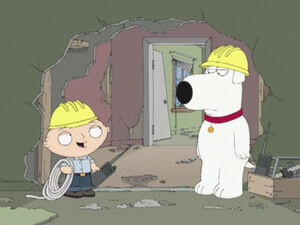 Later, Meg shocks the family when she announces that she’s pregnant. Meg is unwilling to go through with an abortion, so Peter decides to force Michael to marry her with a shotgun. However, at his house, after learning of Meg’s pregnancy, Michael agrees to marry her. Meg decides to go through with it until the wedding ceremony, where she reveals to Lois that she’s just found out she’s not actually pregnant, she just had her period. Lois suggests that Meg tell Michael and Peter the truth. When she does however, Michael bails out completely, while Peter, on the other hand, feels bad about bringing Meg into this situation and apologizes.

Meanwhile, Stewie proposes to Brian that they invest on renovating a house that was wrecked during the floods, then sell it off for huge profits. However, after sinking all of their money into the project, they find that they cannot cope either with the task at hand or with working together, Brian not least because of Stewie's attitude on the radio. The pair go broke and the house begins to deteriorate to the point that the upper level collapses entirely, so Stewie comes up with the idea of emptying a tank of gasoline, lighting a match and running. After a heavily milked explosion, Brian remembers that that day was the day the electrician had come, and his truck was still outside the house, resigning themselves to his death.