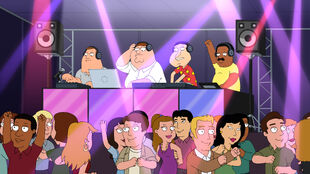 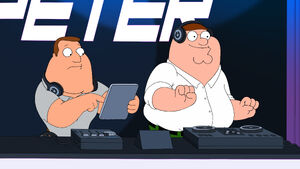 The guys decide to turn their Drunken Clam bull sessions into a podcast, but when Cleveland's ramblings wear them out. Trying again, Peter's difficulties with running their computer after a particularly distasteful discussion result in a music mix and they are invited to DJ at a club.

After the act becomes a success, the club owner encourages Peter to branch out on his own at the Electric Clam Festival, but his dumping of the guys doesn't go over well. When waking up after an extra-loud rehearsal, he finds he is deaf. He turns to the guys for help, but is rebuffed at first, but after they reconsider, they agrees to stick by his side and help them. But without being able to hear the sound selection, Peter runs an audio book and they blow the gig. Back at the Clam, Peter reveals that his deafness was caused by stuffing Oxycontin in his ears while Joe struggles to play video games. 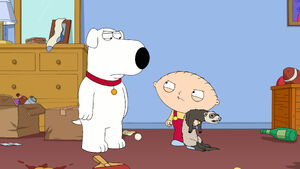 Meanwhile, Lois suffers from allergies and decides to force Brian to sleep with Stewie, who looks forward to the arrangement. But when Brian's slovenly habits and manners get on his nerves, he tries to drive him out by getting a ferret. As they start to fight, Lois intervenes and lets them know that things are back to normal, her allergies caused by Peter stuffing the pillowcases full of straw, cartoon-style. As Stewie and Brian reconcile, Stewie is attacked by the ferret and they struggle to kill it.

Retrieved from "https://familyguy.fandom.com/wiki/Peter%27s_Def_Jam?oldid=192738"
Community content is available under CC-BY-SA unless otherwise noted.