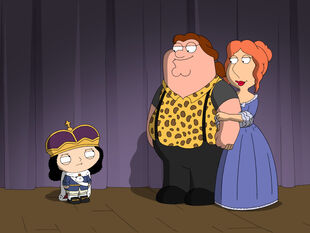 Peter's Progress
Peter learns about his past life as Griffin Peterson.

Plot: Cleveland introduces his Jamaican cousin Madame Claude to his friends, saying she is a fortune teller and offering to have her read their palms and determine past lives they have had; Joe was once an octopus whose legs were bitten off by a shark, and Quagmire was Jack the Ripper. When Claude reads Peter's palm, she discovers that he was Griffin Peterson, the founder of Quahog, retconning the story of Miles "Chatterbox" Musket and the Magic clam established in "Fifteen Minutes of Shame" as a myth, and proceeds to relay the events of his life. 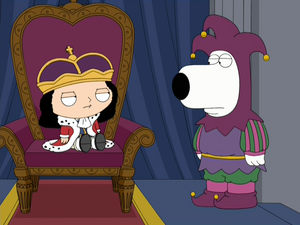 In 17th century England, Griffin Peterson is on his way to his wedding to his true love, Lady Redbush; however, King Stewart III, the ruthless ruler of England who wishes to take Redbush for himself, exiles Griffin to the New World and tells his distressed bride that he is dead, marrying her himself.

Griffin establishes the colony of Quahog as a thriving white supremacist settlement and moves on with his life, marrying Megan. Redbush, meanwhile, suffers a very open marriage with King Stewart, and continues to lament Griffin's apparent death until King Stewart's jester, under threat of death, secretly reveals to Redbush that Griffin is still alive. Redbush immediately departs for Quahog and reunites with Griffin, who "divorces" Meg by shooting and killing her with a musket. 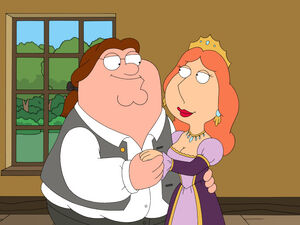 After learning of Redbush's disappearance six months after she first left, King Stewart makes his way to Quahog to reclaim his wife and kill Griffin. Upon being discovered, Griffin threatens to kill Stewart's Cockney army lieutenant, while Stewart threatens to kill Redbush. After exchanging threats without getting anywhere, Griffin and Stewart decide to settle their differences with a talent show. For his act, King Stewart steals his jester's mostly unfunny jokes (which the audience laughs at anyway); Griffin and his friends, on the other hand, steal the show with a rock number. This effectively wins over Redbush, and she and Griffin remain in Quahog to live happily ever after, presumably to the "old age" of 30, and Madame Claude also implied that Lady Redbush died while giving birth.

Retrieved from "https://familyguy.fandom.com/wiki/Peter%27s_Progress?oldid=216328"
Community content is available under CC-BY-SA unless otherwise noted.