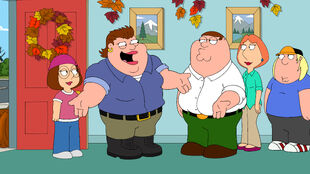 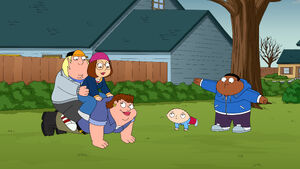 Lois returns from shopping for Thanksgiving and isn't happy about the holiday due to lack of help from the family. Meg brings in the mail which includes a letter from Peter's sister Karen which most of the family has never heard about, although Lois mentions they are estranged. She writes that she is visiting for Thanksgiving since she can't spend the holiday with their mom like she has done in the past. When she arrives, the family is glad to meet her except for Peter as she greets him with a fart to the face. Peter's friends recognize her as professional wrestler “Heavy Flo” and gush over her abilities. In the kitchen, Peter moans about having his sister over with the way she treats him. During dinner, she embarrasses him further with stories of their youth and encroaches on his traditions. During a family football game, Karen knocks Peter almost senseless and pulls her signature wresting move on him. 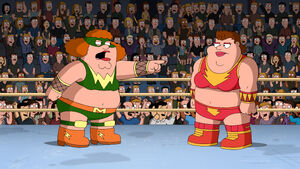 Meg begins to see Karen for the bully that she is and approaches Peter about doing something about it. He resists because he is afraid of what she could do to him but he changes his mind to become a lady wrestler. Peter dons the disguise of “Maxie Patty” and gets “help” from his friends. During one of her matches, Peter confronts his sister in his disguise and calls her out, getting an invitation to face her. She immediately begins to wallop him but when he blurts out her name she is aware of who it is as they continue their match. But when Karen gets upset after Peter manages to strike some blows, she nearly breaks Peter's arms until Meg arrives in wrestling disguise and flattens her with a chair. She reveals herself to Peter and declares that she will always stand up for her dad as Peter apologizes for his treatment of her.

Later, with Karen in coma at the hospital and needing an organ transplant, Peter denies being a match and leaves her to her own devices.

Retrieved from "https://familyguy.fandom.com/wiki/Peter%27s_Sister?oldid=200672"
Community content is available under CC-BY-SA unless otherwise noted.