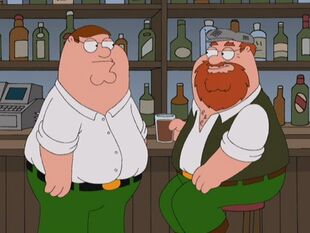 Peter's Two Dads
Peter accidentally kills his father, only to learn he's not his real father. 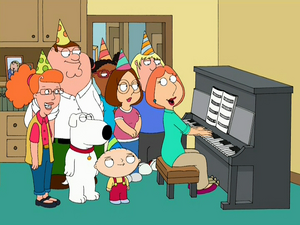 Meg asks for a lot of things, like a live band, to perform at her birthday party. Peter and Lois have no idea what the party is for, and after being reminded by Chris that Meg’s birthday is coming up, they both admit they forgot and, worse yet, aren’t sure how old she will be. Peter and Lois begin to organize Meg’s 17th birthday party, which Meg complains is too childish. Peter dresses up as a dirty hobo clown and after getting drunk and trying to ride his unicycle down the stairs, falls and lands on his father, Francis. Francis is taken to the hospital, where he later dies, his last words to Peter being, “You’re a fat, stinking drunk!” Peter then vows to never drink again, and takes up the habit of smoking crack instead.

Brian refers Peter to a hypnotherapist, where he uncovers memories of Francis telling him he is not his real father. Peter goes to talk to his mother about it, and she tells him that she had an affair with an Irish man while vacationing in Ireland 40 years earlier. So Peter and Brian go to McSwiggan Village, a stereotypical small Irish village to search for Peter’s long-lost father, whose name is Mickey McFinnigan. Upon asking the locals if they know him, they find out he is the town drunk. 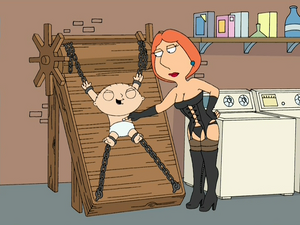 The two finally meet in Wifey McBeaty’s Tavern, but Mickey doesn’t believe that he is really Peter’s father. So Peter challenges him to a drinking contest and wins, which in turn wins Mickey’s admiration and proves to him that Peter must be his son.

While Stewie going through the greed phase that is typical of toddlers his age. Lois finally gets fed up over it, and punishes Stewie by slapping him. Stewie becomes fearful at first, but then develops a taste for abuse. He repeatedly tries to get Lois to strike him, but gives it up after admitting he might have a problem.

Retrieved from "https://familyguy.fandom.com/wiki/Peter%27s_Two_Dads?oldid=216371"
Community content is available under CC-BY-SA unless otherwise noted.