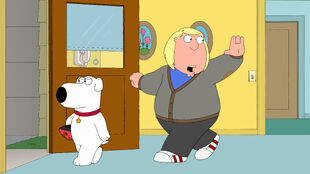 Peter, Chris, & Brian
When Peter realizes he's done nothing with his life, he tries to "fix" Chris.

Plot: Peter finds a letter from his mother's estate and he decides to return to retrieve his teenage porn stash after the house is sold with the help of the guys. However, they meet the new owner of the home who invites them to get it out before his kids find it. After getting it home, the enjoyment is short lived and he finds a video note to himself from his teenage years when he was young and optimistic and he realizes that he never became the success that he'd thought he'd be. While watching, Chris enters and Peter sees himself mirrored in Chris and decides to keep him from becoming just like him. 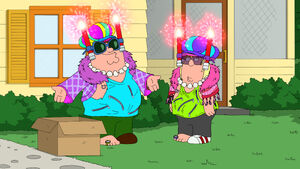 He starts his training by dressing him flashy while trying to deny wanting attention, then teaches him to high step around while wearing giant hats. Brian points out the Chris needs to find his own path so Peter decides to have Chris follow and observe him as the most worldly person they know. Brian exposes him to things like Shakespeare in the Park and art but Chris naturally follows lowbrow pursuits. Eventually the hard work begins to rub off and Chris becomes refined, brushing off Peter's offer to have some old-fashioned fun. 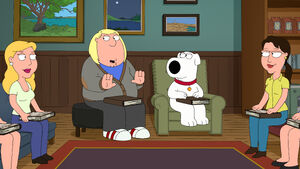 As they set of on further adventures, Peter becomes determined to win his son back. However, Peter's attempts fail as Chris overhears Peter crying that Peter feels like they aren't friends anymore. At a coffee shop book reading with Brian, Chris calls out his pretentious nonsense. As Peter heaves tater tots in a zoo at a panda, Chris finds him and lets him know he really wants to be just like him as an adult and they make up. In an epilogue, television news talks over the family trying to wrap things up.

Retrieved from "https://familyguy.fandom.com/wiki/Peter,_Chris,_%26_Brian?oldid=214726"
Community content is available under CC-BY-SA unless otherwise noted.