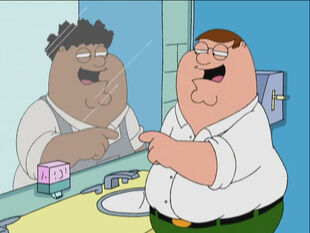 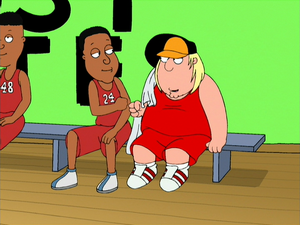 When Chris starts talking "street", Peter first thinks he is "speaking in tongues" and tries an exorcism. Later, at Cleveland's suggestion, Peter tries to get Chris to connect with his Irish ancestry at the Museum of Irish Heritage, but a trip to the genealogical section of the Quahog Public Library reveals the Griffin family has a black ancestor, Nate Griffin. After Peter finds out from Carter's book on the Pewterschmidt family history that Nate was a slave owned by the Pewterschmidt family, Peter demands reparations from Carter, who gives him $20,000 never to mention the matter again. Peter squanders the money to convert the living room into a replica of Pee-Wee’s Playhouse, which angers Lois, and Peter's new black brothers.

Meanwhile, after a basketball game, Stewie becomes obsessed with the cheerleaders at Buddy Cianci Junior High, because he believes they have mind control powers, having seen them pump up the audience, including himself. He begins following them and listening to their conversations to learn about their techniques, eventually adopting their ways. While spying on the cheerleaders in the locker room at school, Stewie hears the lead cheerleader, Cindi yelling at the squad for messing up their pyramid during practice. He concludes that the pyramid is their source of power, so he plots to get rid of Cindi to take her place at the top of the pyramid at the upcoming game. 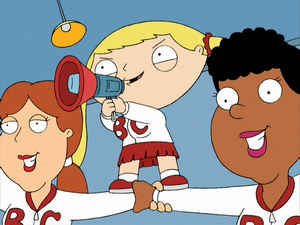 At the game, Peter is ostracized by both the black and white communities, while Stewie kidnaps Cindi, binds her with rope, covers her mouth with duct tape, and hides her in the men’s bathroom. Dressed as Cindi, he takes her position on top of the pyramid and attempts to control the audience, telling them to stab each other with knives. The pyramid falls and Stewie drops the megaphone.

In the bathroom, Peter soon hallucinates about Nate, who teaches him not to matter that he has a black ancestor and encourages him to do something nice with the money.

Peter picks it up and announces to the audience that he realizes he made a mistake, and that he will be sharing his reparation money with his brothers, tossing the money onto the basketball court. When black and white audience members grab the cash, Peter announces he meant it only for his black brothers.

In the closing scene, Quagmire finds Cindi bound and gagged in the bathroom stall and is delighted, exclaiming “Dear Diary...JACKPOT!”

Retrieved from "https://familyguy.fandom.com/wiki/Peter_Griffin:_Husband,_Father...Brother%3F?oldid=216405"
Community content is available under CC-BY-SA unless otherwise noted.