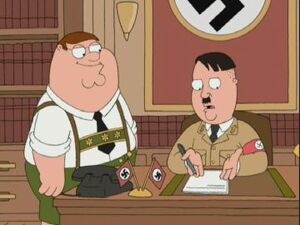 Peter Hitler was Peter Griffin's great uncle and brother of Adolf Hitler, appearing in "Untitled Griffin Family History". He was always annoying to Adolf and interrupted him during his "Nazi stuff". He helped Adolf get great feedback from a rally, but this was also to Adolf's annoyance.

On the extended DVD cut, Peter accidentally killed both Adolf and his wife Eva Braun.

Retrieved from "https://familyguy.fandom.com/wiki/Peter_Hitler?oldid=230819"
Community content is available under CC-BY-SA unless otherwise noted.