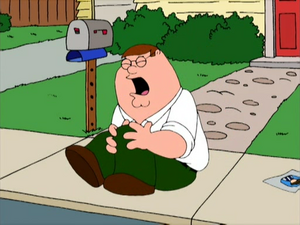 Peter hurts his knee is a running gag on Family Guy and usually originates as a parody of Charlie running for home after discovering the final Golden Ticket in Willy Wonka and the Chocolate Factory, complete with an instrumental rendition of "I've got a Golden Ticket" from the film.

In "Wasted Talent", after Peter receives the last silver scroll in a bottle of Pawtucket Patriot Ale, someone tells him to run home as fast as he can. When he finally gets to his house, he trips over himself and hurts his knee.

In the same episode, after being banned from the tour of the Pawtucket Brewery, Peter asks Pawtucket Pat if he even gets a Chumbawumba song. Pat obliges, but the Chumbawumbas only sing part of the song before kicking Peter in the knee.

In "Brian Goes Back to College", in opening credits for the new incarnation of The A-Team, Peter plays John "Hannibal" Smith. In the theme sequence, his Jeep rolls over and he grabs his knee, and begins wincing in pain.

Lois and the Fox News Contract

In "FOX-y Lady", Lois is now the victim. After signing a contract with Fox News Channel, her boss tells her to run home as fast as she can, but she trips. Unlike Peter's initial trip, she actually grabs hold of her breast.

Chap of the Manor

In "Family Guy Viewer Mail No. 2", British Peter "Neville" falls down and grabs his knee, hissing "bugger" through the pain after being chased Benny Hill-style by the London Bobbies for accidentally killing Queen Elizabeth II.

Meg has a flashback of the first Peter's knee gag from "Wasted Talent" in "Better Off Meg".

In "Young Parent Trap", an African villager is charged with taking old army condoms back this village. He runs through the savannah, but when he gets in front of his hut, he trips and makes a clicking noise in pain.