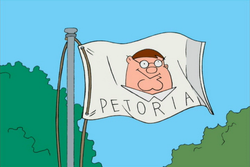 Petoria was a country founded and disbanded in "E. Peterbus Unum", Peter accidentally discovers that his property is technically not part of the United States. He declares himself president of the independent nation of Petoria. Petoria's sole territorial expansion was the annexation of "Joehio" - Joe Swanson's pool - where Peter later threw a party with fellow dictators including Saddam Hussein, Muammar al-Gaddafi and Slobodan Milošević. Peter abused his power as president and was soon forced to surrender to the US government during Operation Desert Clam over the dispute concerning Joehio.

The original name for the country was "Peterland" but he had to settle on "Petoria" because the gay bar down by the airport already had the name.

In "Inside Family Guy", the hallways of the production offices feature props from past episodes including the Petoria flag.