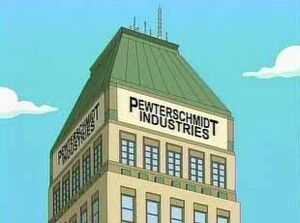 Pewterschmidt Industries is part of Carter Pewterschmidt's business empire. In "Running Mates" it is also said to be involved in shipping. In "Business Guy", son-in-law Peter Griffin takes over the business when Carter slips into a coma and introduces new products such as The African-American Heart Monitor and Jeremy Irons Cereal.

Brian and Stewie follow Carter to Pewterschmidt Industries when Brian suspects Carter is an impostor, but discover he is withholding a cure for cancer from their pharmaceuticals lab in "The Old Man and the Big 'C'".

Peter confronts Carter over his lack of Christmas spirit at Pewterschmidt Industries in "Christmas Guy".

After discovering how much love he has for Lois and the family after being shot in "Regarding Carter", Carter considers retiring from Pewterschmidt Industries and donating all of his money to charity.

Retrieved from "https://familyguy.fandom.com/wiki/Pewterschmidt_Industries?oldid=208109"
Community content is available under CC-BY-SA unless otherwise noted.