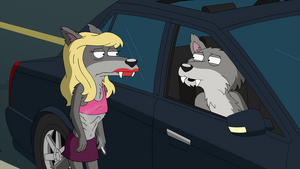 Phil and Robert are two characters in a cutaway set up by Peter when he notes how savage his new female friends are in "Roasted Guy".

Phil is convinced to crow like a rooster instead of howling at the moon, and is laughed at by his friends. He goes home and get into a drunken fight with his wife and kid, eventually ending up on skid row where he gets hooked on drugs and finds himself in prostitution. As he works the streets, a car full of his former wolf friends pull up, to be shocked at seeing their former friend. But when Robert can't resist crowing to mock Phil, he pulls out a gun and kills them all.

Peter reveals that the entire setup is a film project of his titled Cock-a-Doodle-doo, drugging Quagmire into performing as Phil.

Phil is voiced by Ralph Garman.

Retrieved from "https://familyguy.fandom.com/wiki/Phil_%26_Robert?oldid=219445"
Community content is available under CC-BY-SA unless otherwise noted.