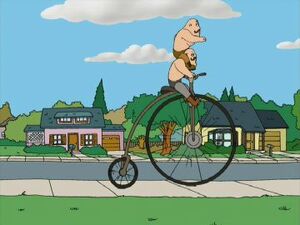 Phineas and Barnaby are two turn-of-the-century (1800s-1900s) strongmen that usually pursue two goals: working out at the Quahog Gym and riding high-wheel 'Ordinary' bicycles of the 1860s-1890s.

When Lois Griffin shoves the kids out of the house to be with her now-thinner husband Peter in "He's Too Sexy for His Fat", Stewie Griffin's wagon rolls to the curb and he falls into a trash can. Barnaby observes that they shouldn't disturb him or the mother won't take him back.

They are seen working out at the Quahog Gym when Joe and Peter start training for the Special People's Games in "Ready, Willing, and Disabled". Their workout consists of riding stationary high-wheeled bikes.

In the news during the opening of Stewie Griffin: The Untold Story they are arrested for use of steroids. They break out of a vintage paddy wagon and escape. They are also seen at the afterparty at the end of the movie.

They again work out to musical accompaniment of the song "Steak and Eggs" in "Bill and Peter's Bogus Journey" when Peter decides to get in shape after fighting an octopus.

They were also bosses on the Family Guy Video Game. When Peter, serving as a hooker, defeats the first one he rubs Phineas or Barnaby's face in his "breasts", and the second one kneels down and reaches his hand to Peter who in return throws them back and forth.

Phineas and Barnaby leap frog by Peter and his friends during the special opening of "Bigfat".

They appear as one of several sidelined characters in the opening of "A Lot Going On Upstairs" and work at the Pawtucket Brewery in "Three Directors".

Retrieved from "https://familyguy.fandom.com/wiki/Phineas_%26_Barnaby?oldid=207675"
Community content is available under CC-BY-SA unless otherwise noted.