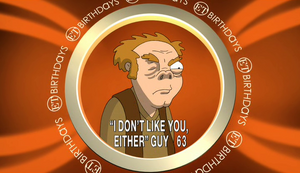 Pignose, also referred to as "I Don't Like You, Either" Guy is a Family Guy character that appears twice in its trilogy of Star Wars parodies.

In Blue Harvest, he tells Luke Skywalker, played by Chris Griffin, that Scott, his brother-in-law, doesn't like him. This was after Scott pushed Luke. When Luke apologizes for not being liked, Pignose reveals that he himself doesn't like Luke either. After Luke points out they barely know each other, the three calm down, and Pignose introduces himself and Scott to Luke.

In It's A Trap!, Entertainment Tonight celebrates his 63rd birthday, which means he was born in 59 BBY according to the franchise timeline, and was 59 years old when he first encountered Luke. The incident also is the reason why he is referred to "I Don't Like You, Either" Guy". He shares his birthday with Lando Calrissian, played by Mort Goldman, and IG-88.

Retrieved from "https://familyguy.fandom.com/wiki/Pignose?oldid=199979"
Community content is available under CC-BY-SA unless otherwise noted.