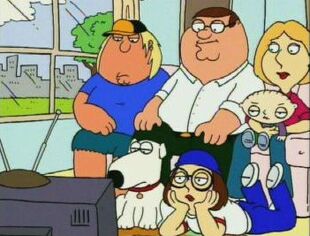 Plot: The episode closely follows the beginning of "Death Has a Shadow". After an interlude of the family watching The Brady Bunch, the scene shifts to the kitchen. Just as Stewie completes his mind control device, Lois takes it away mistaking it for a toy. The family talks about Peter's attending a friends stag party. After Lois cautions Peter about drinking and extracts a promise not to drink, Peter proceeds to drink anyways. Exhausted, Peter neglects his job as toy inspector and a number of dangerous items pass him by and he is fired. Peter is shown trying out as a spokesman for CoCo Puffs, as a salad bar sneeze guard, and in a talent show. The episode ends at this point.

Retrieved from "https://familyguy.fandom.com/wiki/Pilot_Pitch?oldid=212531"
Community content is available under CC-BY-SA unless otherwise noted.