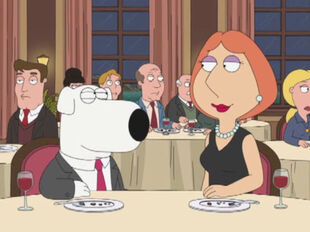 The Temptation of Lois

Play It Again, Brian
Lois' faithfulness to Peter is tested again, as her feelings for Brian become clearer. 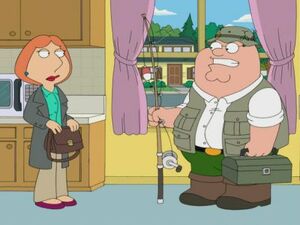 Peter and Lois are having marital difficulties, as Peter would much rather spend time with his friends than with his wife. Brian announces that he has won an award for an essay he wrote and has been invited to Martha's Vineyard to receive it, and offers to take them with him on vacation to ease the anxiety. Peter and Lois agree, and when the three arrive at their fancy hotel, Peter immediately begins enjoying himself. As such, he fails to arrive on time for the party at which Brian receives his award. Brian reads an excerpt from his poem, which is about Lois, and touches her heart. When Peter does arrive, he is completely intoxicated and consequently chastised by Lois.

The next morning, Lois decides to put Peter's misbehavior behind her, but agrees to spend the day with Brian as Peter has already made plans for himself. Toward the end of the day, Lois is dismayed to find that Peter is gone yet again, as he has soiled himself from laughing so hard watching Three's Company so she decides to spend the evening with Brian. As Brian makes preparations, he begins experiencing fantasies of himself kissing Lois and declaring his passion for her. That evening, Brian loses his self-restraint and attempts to make a pass at her aggressively; Lois is greatly troubled by this, possibly not least by her own feelings, so she forces him out of the room.

As Brian mulls over the severity of his own actions, even calling himself a rapist, and asking Stewie for help, Lois remains concerned for both Peter and Brian. The next morning, Lois tells Peter about what happened, and Peter confronts Brian at the hotel bar. Brian says that Peter is not good enough for Lois; Peter counters by saying Brian has never had a long-term relationship with any woman he has ever been with. Their argument quickly escalates to violence, but things settle down as they agree to resolve this problem another way. Brian ultimately promises never to let Lois come between their friendship ever again, and they forgive each other. Brian formally apologizes to Lois for his actions and she forgives him as well, though she does admit that sometimes she feels the same way Brian does about her. Nevertheless, she chooses to remain faithful to Peter, they sing "The Spirit of Massachusetts" and the three happily return home as if nothing bad ever happened. 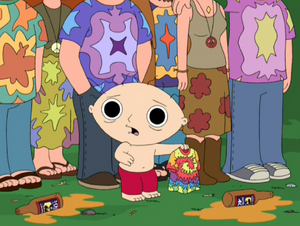 Back at home, since no one else was available, Peter and Lois have decided to ask Herbert to look after Meg, Chris and Stewie while they are away. Herbert makes several sexual remarks to Chris as he always does. Herbert surprises the children by announcing it is bath day, not for the children but for Herbert himself. He is disappointed when Meg bathes him rather than Chris. That night, after Herbert reads Chris "Peter and the Wolf" as a bedtime story, Chris finally asks him, "Are you a pedophile?"

Retrieved from "https://familyguy.fandom.com/wiki/Play_It_Again,_Brian?oldid=216346"
Community content is available under CC-BY-SA unless otherwise noted.