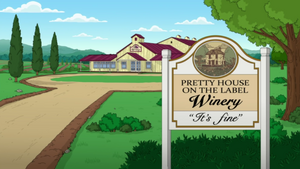 The Pretty House on the Label Winery is where Lois is employed as an up-and-coming executive in "Disney's The Reboot".

When the network conducts a focus group to consider rebooting the show to focus on Lois with Peter as her stay-at-home house husband, the test footage shows her being placed against Smarmy J. Tiestraightener III for the position. The promotion is almost given to Smarmy until Peter arrives posing as a company president reporting that Lois helped land a big contract with him. Lois is given the promotion but as Peter walks away and removes his mask, Lois pulls his face off to reveal it a mask covering her face since it is her show. The pair continue to pull successive masks off until Peter is left as a bare skull.

Retrieved from "https://familyguy.fandom.com/wiki/Pretty_House_on_the_Label_Winery?oldid=215755"
Community content is available under CC-BY-SA unless otherwise noted.