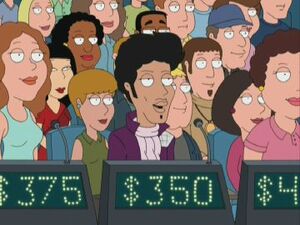 Prince Rogers Nelson (June 7, 1958 - April 21, 2016) was an American musician. He performs under the mononym of Prince but has also been known by various other names, most notably as an unpronounceable symbol which he used as his stage name between 1993 and 2000. During this period, he was usually referred to as The Artist Formerly Known as Prince.

He appears as a contestant on The Price is Right in "Tales of a Third Grade Nothing".

Prince and Alan Thicke encourage Meg and Chris to 'head towards the light' when they are caught inside of the house during an extermination in "Big Trouble in Little Quahog".

He is voiced by Mike Henry.

Retrieved from "https://familyguy.fandom.com/wiki/Prince?oldid=213766"
Community content is available under CC-BY-SA unless otherwise noted.