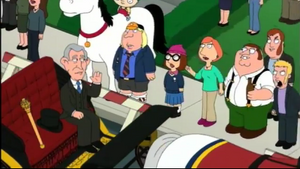 Charles, Prince of Wales (Charles Philip Arthur George; born 14 November 1948) is the heir apparent and eldest son of Queen Elizabeth II and Prince Philip, Duke of Edinburgh. Since 1958 his major title has been His Royal Highness The Prince of Wales. He is the longest-serving heir apparent in British history.

Prince Charles appears in "Family Guy Viewer Mail No. 2" as the British Griffins wait for the Queen to pass in parade. The crowd enjoys yelling "wanker" at Prince Charles as he passes by which he stoically accepts.

In "Bookie of the Year", members of the royal family including Prince William and Kate Middleton, Queen Elizabeth and Prince Charles eat at the restaurant opened by Frank Sinatra, Jr., Brian and Stewie.

He is voiced by Ioan Gruffudd.

Retrieved from "https://familyguy.fandom.com/wiki/Prince_Charles?oldid=213037"
Community content is available under CC-BY-SA unless otherwise noted.