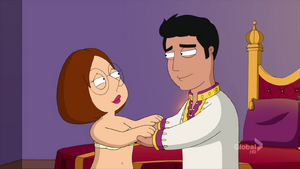 Prince Faisal is the son of a rich Arab king who purchases Meg to become his wife in "Leggo My Meg-O".

When Meg finds herself delivered to a rich, fat Arab and puts up a show of defiance after being sold as a sex slave, he reveals he bought her to be his handsome son's wife. Prince Faisal makes a heartfelt proposal, offering to send her home if she wishes but proposes marriage which Meg gladly accepts. But as they start to kiss, Stewie picks off the Prince with a silencer-equipped gun. Stewie blanks out Meg's memory of his involvement, leaving her to only remember her dead suitor.

Retrieved from "https://familyguy.fandom.com/wiki/Prince_Faisal?oldid=221615"
Community content is available under CC-BY-SA unless otherwise noted.