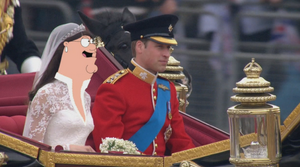 Prince William, Duke of Cambridge KG (William Arthur Philip Louis; born 21 June 1982), is the elder son of Charles, Prince of Wales, and Diana, Princess of Wales, and third eldest grandchild of Queen Elizabeth II and Prince Philip, Duke of Edinburgh. He is second in the line of succession, behind his father, to the thrones of sixteen independent sovereign states known as the Commonwealth realms: the United Kingdom, Canada, Australia, New Zealand, Jamaica, Barbados, the Bahamas, Grenada, Papua New Guinea, the Solomon Islands, Tuvalu, Saint Lucia, Saint Vincent and the Grenadines, Belize, Antigua and Barbuda, and Saint Kitts and Nevis.

In "Livin' on a Prayer". Peter Griffin imagines what it would be like to have your dreams granted and finds himself superimposed over Cathrine Middleton's body on her wedding day to Prince William. As they ride off, Peter wonders when the Queen will die, referring to the nonagenarian Queen Elizabeth II.

Retrieved from "https://familyguy.fandom.com/wiki/Prince_William?oldid=145699"
Community content is available under CC-BY-SA unless otherwise noted.