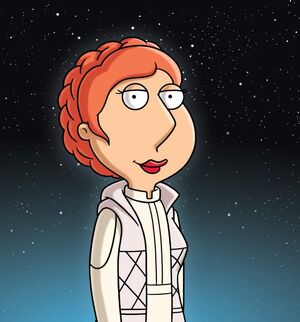 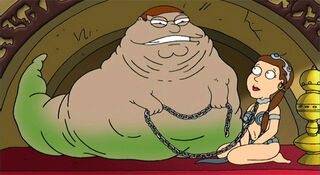 Princess Leia Organa Solo is a fictional character in the Star Wars universe. She is portrayed by actress Carrie Fisher in episodes IV-IX.

She is one of the main protagonists of the original Star Wars trilogy. In Return of the Jedi, it is revealed that she is the twin sister of Luke Skywalker, and the daughter of Darth Vader. In the Star Wars prequel films, her mother is identified as Padmé Amidala. Her adoptive father is Bail Organa, the head of Alderaan's royal family and a supporting character in the prequels.

Leia is seen as Jabba the Griffin's slave in "He's Too Sexy for His Fat". In Return of the Jedi, she was Jabba the Hutt's slave, and Hutt is the basis for the Griffin ancestor.

Retrieved from "https://familyguy.fandom.com/wiki/Princess_Leia?oldid=217682"
Community content is available under CC-BY-SA unless otherwise noted.