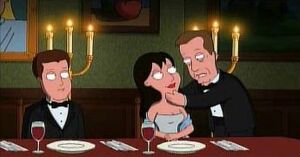 Priscilla was James Woods' companion in "And Then There Were Fewer". She is later murdered by Diane Simmons. When Diane explains her plan to Lois, she reveals that Priscilla was an intern at the Quahog 5 News. Diane has her seduce James Woods and convert him to Christianity, which leads to the invitations to the dinner. In James Woods' mansion, Stephanie and James were both killed and Priscilla fainted. When she came to, she discovered Diane's plans, seeing Diane taking the knife she used to kill James out of his body, causing her to panic and Diane to slit her throat to make sure she didn't tell anyone. Diane then stuffed her body in the ceiling vent in Tom Tucker's room as part of the "proof" to frame him.

She was voiced by Ashley Tisdale.

Retrieved from "https://familyguy.fandom.com/wiki/Priscilla?oldid=188364"
Community content is available under CC-BY-SA unless otherwise noted.