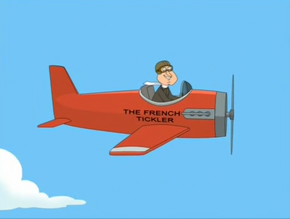 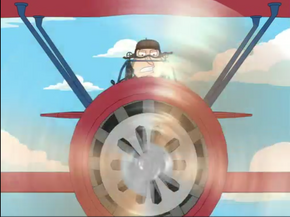 Glenn Quagmire is a professional pilot and owns at least two personal aircraft seen on the show.

In "Mother Tucker", he owns a mono-wing stunt plane named "The French Ticker" which he uses to fly though billboards containing women's crotches, except for when he comes to one of Greta Van Sustren, which he needs to temporarily bypass until flying through a billboard of Jack Daniel's.

When a robot Miley Cyrus goes berserk in "Halloween on Spooner Street" and kidnaps Evil Monkey, Peter and Quagmire team up in the latter's machine gun-equipped biplane to take her down King Kong-style.

Although it isn't one of his personal planes, but one he 'borrows' from a military aircraft storage facility, he demonstrated the ability to fly a Japanese WWII Zero fighter in a prank on Peter and Joe.

Retrieved from "https://familyguy.fandom.com/wiki/Quagmire%27s_Aircraft?oldid=218743"
Community content is available under CC-BY-SA unless otherwise noted.