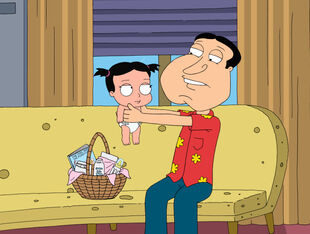 Quagmire isn't sure what to do with his child

Quagmire's Baby
Quagmire takes care of an infant and Stewie clones himself. 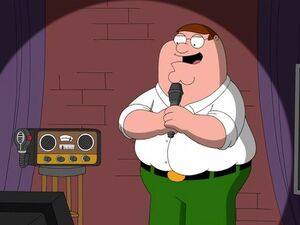 Quagmire decides to have a garage-sale, at which he sells an old radio to Peter. Seven weeks later, Peter still can't get the radio to work, Chris tells him the static makes it possible to talk to the dead. Peter thinks he contacted Ronald Reagan, yet he discovers it is actually Rich Little he is talking to. When he goes to Quagmire in order to get his money back and Quagmire denies to do so, the two see a basket with a baby in it. Quagmire desperately tries to take care of the baby he calls Anna Lee, yet as she ruins his sexual relationships due to her crying, he decides to give her away for adoption. Later on he sees that as a terrible mistake, yet when he goes to her adoption family's house, he sees her happy, although he happily notes he may bump into her in eighteen years as he is still his old self. 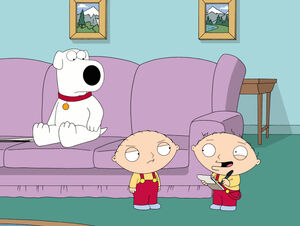 Elsewhere, Stewie creates a mentally disabled clone named "Bitch-Stewie" in order to take care of his tasks, and to do several other things, like washing his back. Brian, seeing how smoothly the whole thing seems to work out, wants a clone too. Once made "Bitch-Brian", was worse than Bitch-Stewie, due him being made by him, because regular Stewie couldn't be bothered, Bitch-Brian quickly loses his jaw. Stewie then claims the clones are not as stable as he thought. Then Bitch-Stewie limps into the room with a broken leg and an eyeball hanging out. Bitch-Brian soon dissolves and then, after Bitch-Stewie hopes it doesn't happen to him as well, he dissolves too.

Retrieved from "https://familyguy.fandom.com/wiki/Quagmire%27s_Baby?oldid=211693"
Community content is available under CC-BY-SA unless otherwise noted.