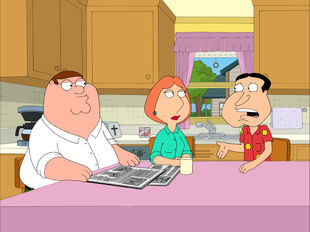 Quagmire's Dad
Quagmire gets the surprise of his life when his dad comes to visit. 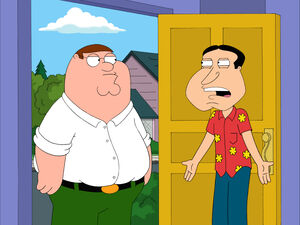 Deciding to visit Quagmire at his home, Joe and Peter are quickly introduced to Quagmire's father, Lieutenant Dan Quagmire. Immediately turned off by his boring stories, the two soon begin texting each other on their cell phones, and mutually imply that Quagmire's father is a homosexual. Deciding to confront him the next morning, Quagmire decides to invite Peter and Lois to the Naval Ball as guests of his father. The two quickly begin arguing however, with Quagmire insisting that Peter is just jealous because his dad's a drunk and his is a hero. Later that night at the ball, Quagmire is soon bombarded by comments about his father's sexuality from fellow sailors. Deciding to confront his father, Quagmire soon discovers that his father is actually a "woman trapped in a man's body," in desire of a sex change operation. The next day, Quagmire decides to ask Peter and Lois for advice, with Lois suggesting that Peter go along with him to his father's operation. Worried as the operation is taking place, the surgery is announced to be a success, with Dan Quagmire emerging as an attractive blonde woman. Inviting Quagmire and his "new friend" Ida to dinner later that night, Peter soon begins asking her about the surgery. With Lois expressing her embarrassment, Ida reveals that she has no problems discussing the procedure, causing Quagmire to become frustrated, and return home. Deciding to confront him back at the house, Ida and Quagmire discuss their newly altered relationship, with Quagmire left to reject his father. 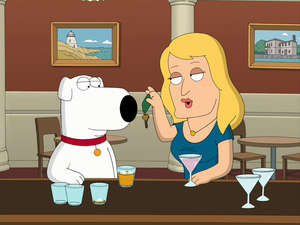 Meanwhile Brian announces that he will be leaving for a few days to attend a seminar in New Haven about creating your own web series. Returning home to Quahog later that week, Brian decides to stop at the bar on the way home. While there, he comes across Quagmire's father, Ida, and the two quickly bond. Deciding to go back to Ida's hotel room, the two decide to kiss and have sex. The next morning, Brian shares his newfound love with Peter and Lois, and decides to show a picture that he had taken of his new date with his cellphone. Immediately busting out laughing, Brian is left to suggest that they are both jealous because he's found a "real woman", which makes them laugh even harder. Going up stairs to cool off, Brian begins talking with Stewie about Dan Quagmire's sex change. Inquiring about sexual relationships with transgendered individuals, Brian learns Quagmire's father's new identity is actually Ida, and begins vomiting profusely. As this occurs, Ida returns to her son's house and decides to apologize to Quagmire, with her son returning the apology. Going on to announce that she found a new boyfriend, Quagmire asks what his name is, and reveals it to be Brian. Quagmire rushes to the Griffin family household and beats Brian senseless, leaving him badly injured. Brian gets the final word, when he tells Quagmire about having sex with his dad and shuts the door.