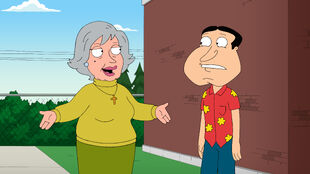 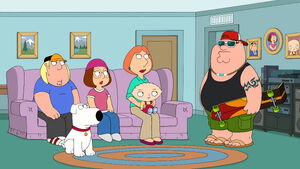 When Meg needs a check for a field trip, Peter finds that his checks are fake so he insists on opening his own checking account. There, they find that his birth certificate gives his real first name as “Justin.” Although Lois tries to rein in Peter, he immediately decides to change his persona to what he believes a “Justin” should be: a young tattooed hipster. He decides to throw a party until Lois puts a stop to things, but Quagmire scores with Keira, an underage girl he picks up and is arrested by Joe for statutory rape. 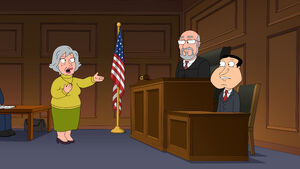 His only chance for leniency at his upcoming trial is for character witnesses, but with his friend's “help” about to blow up in his face, he takes the stand himself and explains about his growing up with a mom that had an overactive sex drive. Despite this, he faces twenty years in jail until his mother arrives.

She admits her past, but claims to have found God and asks that her son be released to her custody. The Judge rejects her request and gives Quagmire 24 hours to get his affairs in order before entering prison. At home, his mother tries to get him to find solace in God but he lashes out at her for trying to use her newly found religion to absolve her past actions. She tries to reason with him but he rejects her advice. He decides he would rather rot in jail than listen to her and leaves. He prepares to enter jail the next day but the Judge arrives to tell him that his sentence has been commuted, thanks to his mother's "talents." He is surprised that despite her new religious life, she would do such a thing, but she admits that she would do anything to help him.

Retrieved from "https://familyguy.fandom.com/wiki/Quagmire%27s_Mom?oldid=213690"
Community content is available under CC-BY-SA unless otherwise noted.