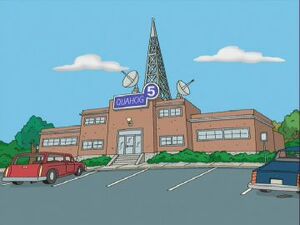 Quahog 5 News, also known as Channel 5 News, and Channel 5 Action News, is the local TV news program in Quahog. They also broadcast to Boston, Massachusetts. In the Pilot Pitch, the station is on channel 6. Quahog 5 appears to be an NBC affiliate as was revealed in "Space Cadet" which featured Brian Williams. Williams goes to affiliate anchor Tom Tucker for the story when the Griffin are launched into space. Channel 5 also has a sister station in Texas, whose main news anchor is Duke Dillon. In addition, The Jerry Springer Show airs on the network, and is highly rated.

In "If I'm Dyin', I'm Lyin'", Dirk Bandit, the human interest story reporter, presents the story of Little Johnny Gobraun, a terminally ill little boy who gets a dying wish from the Grant-A-Dream Foundation to play quarterback for the New England Patriots. After being sacked during the game, Dirk remarks that he should have wished for some blocking.

In "The Kiss Seen Around the World", Meg Griffin and Neil Goldman both got internships there.

In "One if by Clam, Two if by Sea", Williams was temporarily replaced by Greg the Weather Mime.

Although Quahog 5 shows other programs, the news is the program seen most consistently. Quahog 5 News has also broadcast the Buddy Cianci Junior High School School Board President debate between Peter and Lois Griffin in "Running Mates", the medieval joust at Ye Olde Renaissance Faire in "Mr. Saturday Knight", as well as the Harvest Festival in "Love Thy Trophy", the Quahog Veteran's Day Celebration in "Padre de Familia" and a boxing match between Lois Griffin and Deirdre Jackson in "Baby, You Knock Me Out". For the match, Floyd Wetherton was an analyst.

In the first Stewie Griffin: The Untold Story segment "Stewie B. Goode", Tucker recruited Peter Griffin for a new segment called "What Really Grinds My Gears". The segment became very popular, even costing Tucker his job. The segment ended amid scandal involving Griffin's infant son and dog. Tucker regained his job at the same time for exposing the story.

Quahog 5's call letters are "WQHG". Their known broadcast area covers Providence, Quahog, and Boston. They also have a sister radio station, WQHG-FM 97.1. Their most notable program is Weenie and the Butt. They also have aired, for one episode, The Lunch Hour which was later revamped into Dingo and the Baby. The show would be replaced by Dark Chocolate and the Rod featuring Cleveland Brown and Glenn Quagmire, as seen in "Mother Tucker".

In "Tales of a Third Grade Nothing", Stewie Griffin got a job as a field reporter for the station, a job that would help convert the Quahog Cabana Club into pLace.

In "Dial Meg for Murder", their traffic reporter, Drunk Billy's dangerous escapades finally caught up with him, being killed when he crashed the copter into an overpass

In "And Then There Were Fewer", Diane revealed Tom urged the station to replace her with a younger woman and succeeded. Simmons had just turned 40. That fueled the murder plot, and after it succeeded initially it was unknown who would anchor the show after Tom Tucker went to jail and Diane was mysteriously killed. However, Tom was cleared of all charges and paired with Joyce Kinney, whose hair was too short to be the same woman who Diane was initially replaced with, in "Excellence in Broadcasting".

In "Brian Writes a Bestseller", Brian is escorted at the station by a man named Sharhooz.

In the Quahog Thanksgiving Day Parade featured in "Thanksgiving", Tom and Joyce have to contend with the rain while rival stations 2 and 6 have awnings to protect their newscasters. When about to present the float featuring Rocky The Flying Squirrel and Bullwinkle, Tom also has to deal with the car alarm blaring from the Quahog 5 News van.

Quahog 5 News gets a newer, younger reporter named Dallas Portland in "The New Adventures of Old Tom" which attracts female viewers. Tom's attempt to put on a younger image results in his being fired, until Peter helps him to get an exclusive interview by pretending to consider suicide by jumping off of a building.

Retrieved from "https://familyguy.fandom.com/wiki/Quahog_5_News?oldid=209544"
Community content is available under CC-BY-SA unless otherwise noted.