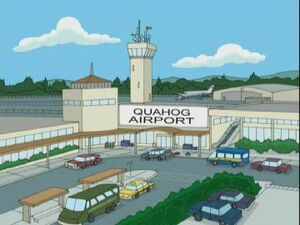 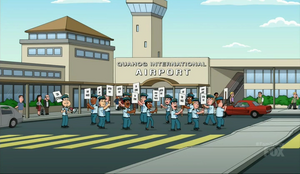 Quahog Airport is the international airport seen often on Family Guy. Glenn Quagmire flies as a pilot for Trans National Airways in "Airport '07". The airport is modeled after Bob Hope Airport in Burbank, California.

Jasper and Ricardo fly from California on Swish Airlines in "You May Now Kiss the...Uh...Guy Who Receives".

Peter flies to Senegal to obtain a mosquito with a disease that hasn't been discovered yet to play a prank on Quagmire in "Halloween on Spooner Street".

The airport is seen in "No Country Club for Old Men", when the Griffin family fly back from Peter's failed audition on America's Got Talent. In this appearance, the airport's name is seen as Quahog International Airport.

Quagmire leads a picket line outside of the airport in "American Gigg-olo" when the airline pilots go on strike.

Retrieved from "https://familyguy.fandom.com/wiki/Quahog_Airport?oldid=213810"
Community content is available under CC-BY-SA unless otherwise noted.