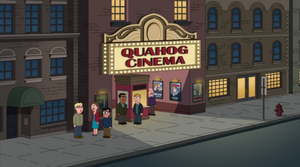 The Quahog Cinema is where Peter Griffin and Brian watch The Sound of Music in live action during a double feature in "Friends of Peter G". When they become inebriated, they disturb the other attendees. After being asked to keep quiet, Peter complains about the figure on the screen talking through the film and together, Peter and Brian attack the screen.

After a night out at the cinema to see a Miles Teller film in "Movin’ In (Principal Shepherd’s Song)", Peter and Lois exit to find that Principal Shepherd has been forced to live in his car and panhandle. Despite Lois' reservations, Peter convinces her to let him move in with them.

Retrieved from "https://familyguy.fandom.com/wiki/Quahog_Cinema?oldid=222677"
Community content is available under CC-BY-SA unless otherwise noted.