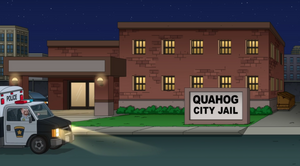 The Quahog City Jail is where Peter, Joe, Cleveland and Quagmire try to get away from their Thanksgiving plans in "Shanksgiving".

When Peter becomes a miserable when he has to face having Thanksgiving with the in-laws, he finds his friends also have reservations about the holiday. Joe mentions that some guys get arrested intentionally to have a quiet Thanksgiving at the city jail, so the guys all commit a small crime to get themselves arrested. However, on the way they find out that the jail is closed due to overcrowding from other dads doing the same thing and instead are sent to the Rhode Island State Prison.

Retrieved from "https://familyguy.fandom.com/wiki/Quahog_City_Jail?oldid=217158"
Community content is available under CC-BY-SA unless otherwise noted.