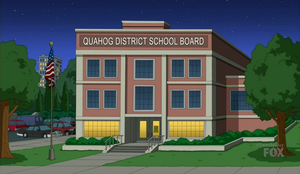 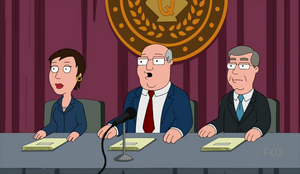 When Principal Shepherd suffers a breakdown during his divorce in "The Peter Principal", the school board seeks a parent volunteer to temporarily take over. When Peter considers taking on the job, Lois tries to talk him out of it but it only convinces him to take on the job after all. When Peter's own behavior gets out of hand due to being manipulated by Meg and her friends in an attempt to extract revenge on those that have bullied them, the school board arrives, based on a tip and is able to restore Principal Shepherd, who has restored his mental state after a sex trip to Thailand.

After Principal Shepherd is caught fat shaming Chris in "Movin’ In (Principal Shepherd’s Song)", Lois raises the issue before the school board which results in his being fired. They later petition successfully to get him his job back.

Retrieved from "https://familyguy.fandom.com/wiki/Quahog_District_School_Board?oldid=222669"
Community content is available under CC-BY-SA unless otherwise noted.