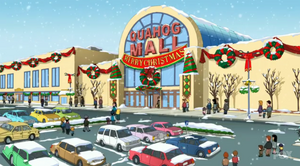 The Quahog Mall is one of the shopping centers located in the Quahog, Rhode Island area. Although many scenes in Family Guy have taken place in a mall, this is the first mall to be identified.

In "Road to the North Pole", Brian takes Stewie Griffin to see Santa Claus. Hoping to cut in line with Quagmire, Brian mistakes his niece Abby who has lost her hair due to chemotherapy, to be a boy, causing her to break out in tears and angering Quagmire. Forced to wait in the back of the line, Santa quits working just as they reach him.

In "Vestigial Peter", Lois forces Peter to go to the mall and shop for new clothes. She tricks him into trying on a dress in Forever 21 and photographs him as she calls him a "gaybo" when he does. Peter also spends time with the piano player in the mall and tries to shop at Sears, discovering it to be a post-apocalyptic wasteland. When Peter finally get to try on a new shirt, he discovers he has a lump on his neck which Lois fears is a tumor and insists he go see Dr. Hartman.

Quagmire goes shopping for a new computer in "Quagmire's Quagmire". When it stops working for him, he takes it back and meets Sonja, a woman with sexual tastes even more extreme than his own.

When the mall owner Carter Pewterschmidt cancels the Christmas Carnival in "Christmas Guy", Peter gets him into the Christmas spirit by accusing him of acting Jewish. When Stewie decides the one thing he wants for Christmas is Brian back from the dead, he runs into his former self on a time traveling trip and "borrows" the time machine return pad to save him from being hit by a car.

Peter takes Meg to the mall in "Meg Stinks!" to get some piercings. After loading her down with every piercing imaginable, they go to a refrigerator magnet store.

Peter and Lois bump into Jesus at the Quahog Mall at Christmastime in "The 2000-Year-Old Virgin".

Stewie and Tom Cruise bump into each other while reaching for the same shirt in "Papa Has A Rollin' Son".

While Peter returns a metal detector in "The Peanut Butter Kid", Stewie lands a part on a national peanut butter commercial.

When Lois takes the family to the mall to buy herself new underwear in "The New Adventures of Old Tom", Brian tries to impress a jewelry store clerk by posing as a millionaire and Peter is left behind by the family.

Meg orgasms for the first time while bouncing on Santa's lap was Stewie in "Christmas is Coming". But when she tries to capture that feeling a second time, she finds Peter has replaced him at the mall.

Retrieved from "https://familyguy.fandom.com/wiki/Quahog_Mall?oldid=217505"
Community content is available under CC-BY-SA unless otherwise noted.