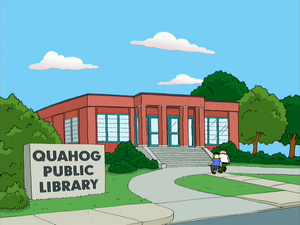 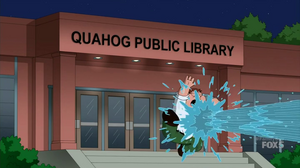 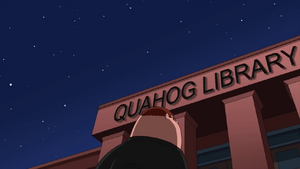 In "Peter Griffin: Husband, Father...Brother?", Peter took his son, Chris, to the Quahog Public Library to teach him about their family's history. There, they discover the history of Nate Griffin, a slave ancestor of the Griffins.

Quagmire tries to make small talk with Sharon the librarian in "The Old Man and the Big 'C'".

In "Turban Cowboy", the librarian happily counts down the seconds until books can be considered late when Peter crashes through the ceiling while skydiving with books in hand, claiming that they had "wieners" already drawn in them.

Peter and Quagmire perform their first public singing gig at the library during open mic in "In Harmony's Way".

Peter's taking up a challenge to drink from a fire hydrant results in the library being flooded in "Underage Peter".

Peter tries to teach Tom Tucker how to be young by making a skateboard video at the library in "The New Adventures of Old Tom".

When Peter is tipped off by Bill Maher that Family Guy will never win an Emmy in "Emmy-Winning Episode", he goes to the Quahog Library to research the matter. The building, despite the shortened name, has design elements from the earliest library.

Joanna works at the library in "Short Cuts" and gets along well with Stewie, whom she finds reading books by George Townsend in an effort to finds out more information about Brian's old friend.

Retrieved from "https://familyguy.fandom.com/wiki/Quahog_Public_Library?oldid=219294"
Community content is available under CC-BY-SA unless otherwise noted.