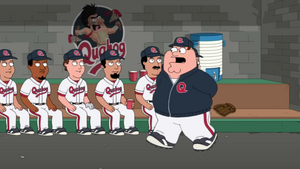 The Quahog Whooping Scalpers are a minor league baseball team that Carter Pewterschmidt buys in "The Movement".

When his coach, Frank 'Cardiac Arrest' Ross suffers a heart attack on opening day and the pitching coach, Bill 'Doesn't Know CPR' McGillicuddy is unable to assist, Carter ends up making Peter 'Little Bingo' Griffin the new coach. Peter enjoys success in the role, but when a bout of stomach cramps cause him to kneel during the national anthem, he is hailed as both a protester and an activist. When he decides to milk his activist role, Carter confronts him over plunging ticket sales and knocks him cold with a baseball bat, causing him to have a 'Marvel's Black Panther-type' experience hosted by Cleveland. There, he is also treated as a hero for speaking out, but they also touch a nerve about him doing it for the right reasons. Before another game, he is warned by Carter not to kneel, but decides to speak up, admitting that he really wasn't an activist, but also proposes making "The Hamster Dance" the new national anthem. 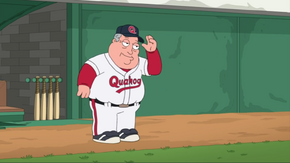 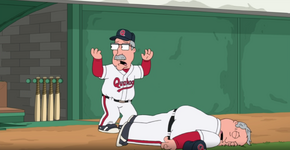 Add a photo to this gallery
Retrieved from "https://familyguy.fandom.com/wiki/Quahog_Whooping_Scalpers?oldid=220241"
Community content is available under CC-BY-SA unless otherwise noted.