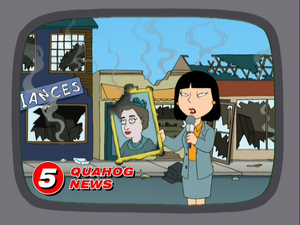 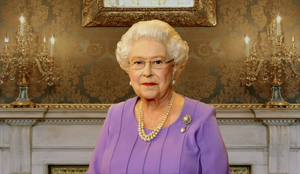 Elizabeth II (Elizabeth Alexandra Mary; born 21 April 1926) is the constitutional monarch of 16 sovereign states known as the Commonwealth realms, and head of the 54-member Commonwealth of Nations. In her specific role as the monarch of the United Kingdom, one of her 16 realms, she is also Supreme Governor of the Church of England.

In "One if by Clam, Two if by Sea", Tricia Takanawa holds up a charred photograph of Queen Elizabeth II after a fire at the Clam's Head Pub.

Queen Elizabeth II appears in "Family Guy Viewer Mail No. 2" as she passes in parade. "Neville", the British Peter wishes to gain a lock of her hair and tries to set up a fake barber chair along the route. When this fails to gain the Queen's attention, Neville and Collingswood steal a motorcycle and give chase to the Queen's carriage, causing her to wreck and be killed. As Neville and Collingswood try to nonchalantly walk away, they are chased by a cohort of London Bobbies.

In "Bookie of the Year", members of the royal family including Prince William and Kate Middleton, Queen Elizabeth and Prince Charles eat at the restaurant opened by Frank Sinatra, Jr., Brian and Stewie. Here, Queen Elizabeth II is voiced by Cate Blanchett.

Stewie loves being pampered like the queen of England while wearing his back brace to correct his scoliosis in "The Dating Game", leading to a cutaway of Elizabeth II wanting her hair to look like someone in a nursing home. She is voiced by Christina Pickles in this appearance.

Retrieved from "https://familyguy.fandom.com/wiki/Queen_Elizabeth_II?oldid=193263"
Community content is available under CC-BY-SA unless otherwise noted.