Family Guy Wiki
Register
Don't have an account?
Sign In
Advertisement
in: Food and Drinks, Bars and Restaurants, Places 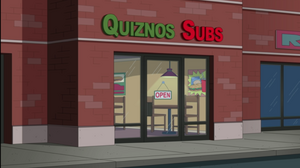 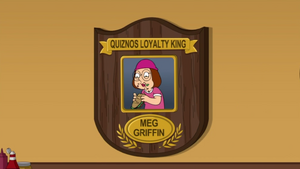 When Meg is believed to have died in a car crash in "Better Off Meg", Quiznos stores throughout Quahog send up lanterns made from bags in her honor as she was known as the 'loyalty king.' Later, they take out a page in the yearbook in her memory and one store clerk proposes to another during her memorial service at Adam West High School.