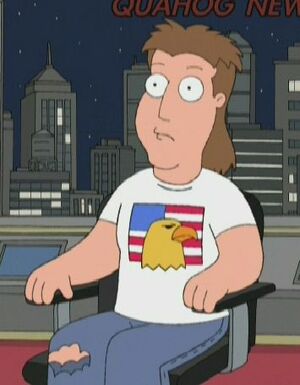 RJ is a Family Guy character from Wisconsin, according to creator Seth MacFarlane.

He first appeared in "Boys Do Cry", where in an interview with Tom Tucker he claims that he once saw Bigfoot while attempting to make love with his girlfriend at the lake. However, due to the amount of mosquitoes in the area, his girlfriend said that "there was no way".

He was also cast as an Imperial Stormtrooper in Blue Harvest. He talks about how he was once again unable to "bone" his girlfriend due to a Death Star drill.

RJ also appears to witness the verification of normalcy in Meg Griffin's boyfriend Anthony in "Go, Stewie, Go!" and participated in the contest to win the dirt bike in "Trading Places".

MacFarlane noted in the commentary for "Boys Do Cry" that RJ was a liked character but just couldn't fit into episodes well.

RJ is interviewed after Mayor Adam West raises the drinking age to fifty in "Underage Peter" and appears as one of several sidelined characters in the opening of "A Lot Going On Upstairs".

He proposes to his girlfriend Janine in "Follow the Money", who starts to agree due to his strong arm. But when he falls and shatters his arm, she says "no way." When he finds a dollar on the floor from a shattered tip jar, he tries to win her over with money, but loses it when Tomik and Bellgarde pass by on a motorcycle. However, at the end of the episode, Janine is seen with him while his arm is in a cast.

RJ is voiced by Mike Henry.

Retrieved from "https://familyguy.fandom.com/wiki/RJ?oldid=217411"
Community content is available under CC-BY-SA unless otherwise noted.