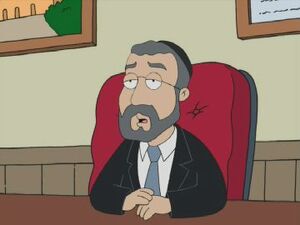 Rabbi Goldberg is a rabbi who first appeared in "When You Wish Upon a Weinstein". He met Peter and Chris Griffin when Peter wanted Chris to convert to Judaism in order to become smarter. Rabbi Goldberg tried to convince Peter that this was not the correct course of action and that to really convert, one would have to devote years of study. He later leads the congregation in synagogue in "Family Goy", doing a sermon on the holiday of Passover. He is voiced by Ben Stein.

Retrieved from "https://familyguy.fandom.com/wiki/Rabbi_Goldberg?oldid=180546"
Community content is available under CC-BY-SA unless otherwise noted.