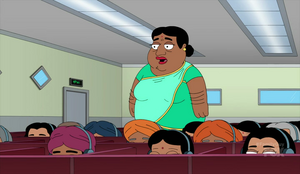 Ranita is a woman that works in a call center in "Road to India".

When Brian travels to India with Stewie in tow in order to locate Padma, a tech support worker whose voice he has fallen for, they find the support room crowded with workers. Brian phones Padma and requests that she stand up, although Ranita stands up first to avoid a python in her cubicle.

Later, during a musical number to finish the episode, Stewie admonishes her for staring at Brian as he is mauled by a tiger instead of finishing the song, "Bollywood Style".

Ranita is voiced by Aseem Batra.

Retrieved from "https://familyguy.fandom.com/wiki/Ranita?oldid=187242"
Community content is available under CC-BY-SA unless otherwise noted.