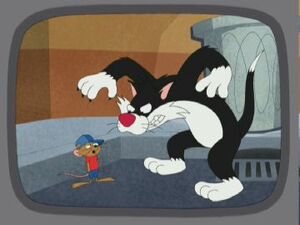 Rapid Dave is a cartoon character Peter Griffin creates in Padre de Familia. Tired of immigrants invading children's cartoons, Peter creates him as an American equivalent to Speedy Gonzalez. He appears to be a rat from the Upper West Side of New York City. In one of his cartoons, Sylvester the Cat is chasing him before he narrowly escapes.

Retrieved from "https://familyguy.fandom.com/wiki/Rapid_Dave?oldid=123088"
Community content is available under CC-BY-SA unless otherwise noted.