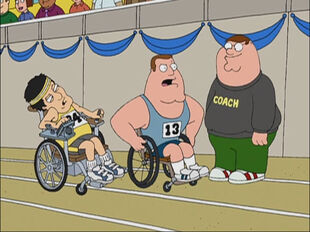 At the Special People's Games

Ready, Willing, and Disabled
After Joe quits the force Peter convinces him to join Special Olympics.

Plot: Chris organizes a car wash to raise money for a boy in an iron lung. When a thief wearing a Jimmy Carter mask steals the proceeds, Joe chases after him and recovers the money, but fails to catch the perp.

This failure severely depresses him to the point where he wants to quit the force and give up being an officer, until a conveniently timed news announcement leads Peter to suggest to Joe that he should enter the Special People's Games. Peter drives Joe mercilessly in training for the games. 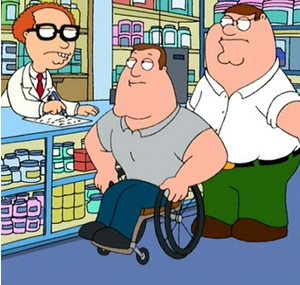 Joe’s most prominent rival at the Games is a wheelchair-bound patient with a voice synthesizer. Peter encourages Joe by citing George W. Bush’s unwillingness to quit after losing the popular vote in the 2000 presidential election. Joe leads the field in the decathlon until a weak long-jump puts his victory in jeopardy. Peter secretly spikes Joe’s sports bottle with steroids that he stole from Mort's pharmacy, and Joe wins the final race to clinch the gold medal. The pair become famous and make public appearances and press conferences around Quahog, until an agent talks Joe into signing a contract with him.

Peter is later stunned to see Joe commercially endorsing a cereal company, and he is furious upon seeing an inaccurate TV movie, Rolling Courage: The Joe Swanson Story. The movie has everything wrong, from Joe being crippled by crooks, whereas he was knocked off a roof by the Grinch, to how he decided to enter the Games depicted without Peter’s encouragement, and it portrays Peter as a discouraging slob, although in real life he encouraged Joe to go the distance. When Brian tells Peter that Joe is successful and inspirational because of his handicap, Peter decides to fake a handicap. Armed with a tape with poorly-done footage showing his “accident” which included him running over a scarecrow who was supposed to be himself, Peter tracks down Tom Tucker and demands fame, commercials, and a TV movie based on himself, but he fails to convince the news anchor and gets thrown out. Jealous of Joe’s fame and lucrative endorsement deals, Peter reveals his doping secret to the public, disgracing Joe. This leads to Joe surrendering his gold medal and sinking back into depression. 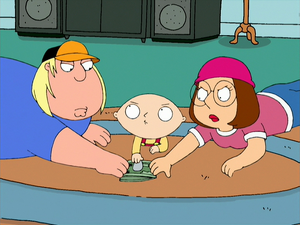 Meanwhile, Meg, Chris and Stewie fight over a money clip holding $26 while hoping no one else claims it. Distrust flares among them and they repeatedly clash, trying to outwit each other for the money.

When someone finally arrives to claim the money clip, Joe recognizes him as the car wash thief. Joe chases him again, this time leading to the thief’s arrest and death; ironically of a broken spine, and the return of Joe’s faith in himself.

Retrieved from "https://familyguy.fandom.com/wiki/Ready,_Willing,_and_Disabled?oldid=216404"
Community content is available under CC-BY-SA unless otherwise noted.