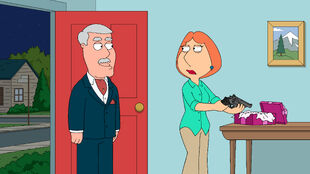 Regarding Carter
Carter finds himself dependent on the Griffins yet again. 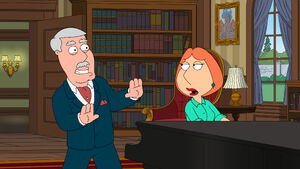 When Carter gives Lois a gun, she tries to hide it from the kids but Peter finds it and gets into his usual mischief. When she tries to force her father to take it back, their pushing match causes the gun to go off and shoot Carter in the head, leaving him in a vegetative state. The family takes him in and tries to restore his memory, and partially succeed in restoring his cognitive functions although without some of his memories. When he finds out what a bastard he has been, he announces his retirement and plans to give away his money to charity at the cost of the family inheritance. 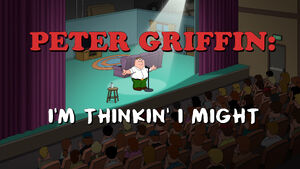 As Peter plots with the kids to try to turn him mean again, they spy Lois enjoying singing with her father and realize that she has finally gotten her father' love that she has always wanted. But as the family all join in song, Carter is shot in the head by Babs who is pissed that he planned to give away all their money. When he recovers he is back to his old self. Peter tries to sign off to Stan Smith of American Dad! but finds that the show is no longer on FOX. When he inquires if its replacement has been more successful, he is met with glum silence from the family.

Meanwhile in a running gag, several of the characters get their own stand-up specials.

Previous Episode /// Regarding Carter \\\ Next Episode

Retrieved from "https://familyguy.fandom.com/wiki/Regarding_Carter?oldid=216453"
Community content is available under CC-BY-SA unless otherwise noted.