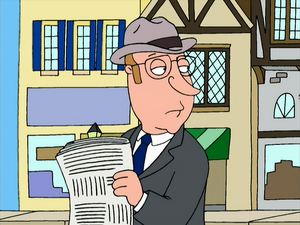 Reginald B. Stifworth is an Englishman who touts the merits of a united European commonwealth. Unfortunately, in "There's Something About Paulie", Shelley Boothbishop and his friend Jeremy disagree with Reginald. They show their disagreement during a drive-by argument.

The character is based on Seth MacFarlane's character of the same name in Life of Larry, the precursor to Family Guy. The drive-by argument is the subject of MacFarlane's first animated cutaway gag.

Retrieved from "https://familyguy.fandom.com/wiki/Reginald_B._Stifworth?oldid=158817"
Community content is available under CC-BY-SA unless otherwise noted.