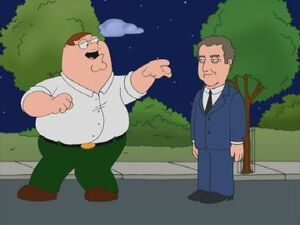 Regis Francis Xavier Philbin (August 25, 1931 - July 24, 2020) was an American media personality and sometimes actor and singer, known for fronting various talk and game shows. He was known as the former co-host Live with Regis and Kelly, Who Wants to Be a Millionaire?, Million Dollar Password, and the first season of America's Got Talent.

He has a cameo in "E. Peterbus Unum" during Peter Griffin's "Can't Touch Me" rap

He is seen with Kelly Ripa after their show in the "Family Guy Viewer Mail No. 1" segment "No Bones About It". Ripa, a maneating alien, chooses Regis as one of her victims. Philbin and Ripa provided their own voices for the gag.

Hope mentions she watches Live with Regis and Kelly in "Livin' on a Prayer".

Retrieved from "https://familyguy.fandom.com/wiki/Regis_Philbin?oldid=225262"
Community content is available under CC-BY-SA unless otherwise noted.