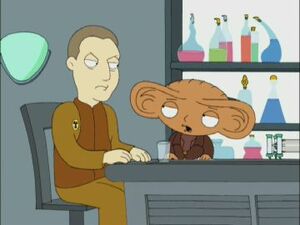 René Murat Auberjonois (June 1, 1940 - December 08, 2019) was an American actor, known for portraying Father Mulcahy in the movie version of M*A*S*H and for creating a number of characters in long-running television series, including Clayton Endicott III on Benson for which he was nominated for an Emmy Award, Odo on Star Trek: Deep Space Nine, and attorney Paul Lewiston on Boston Legal.

He reprised his role as Odo for a confrontation with Quark Griffin in Stewie Griffin: The Untold Story.

Retrieved from "https://familyguy.fandom.com/wiki/Ren%C3%A9_Auberjonois?oldid=217333"
Community content is available under CC-BY-SA unless otherwise noted.