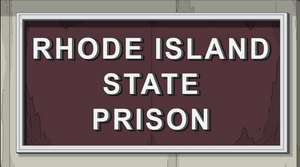 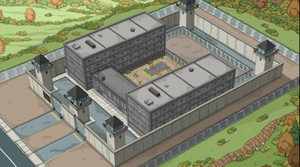 The Rhode Island State Prison is where Peter and the guys end up when their plan to get away from their families for Thanksgiving backfires in "Shanksgiving".

Unhappy with the in-laws coming over for the holiday, Peter finds the guys are not looking so forward to Thanksgiving at their houses either. When Joe mentions that the prisoners at the Quahog City Jail actually have a nice holiday, they guys commit a minor crime with the intent of joining them. However, due to overcrowding at the city jail, they are redirected to the Rhode Island State Prison.

Because they can't get out until court convenes the following Monday, they try unsuccessfully to lay low. When that doesn't work, they find their only alternative is to join gangs. Cleveland Joe and Quagmire find success but Peter is nearly left out, until he is offered a chance to join a bunch of skinheads. However, he finds it is on the condition that he shivs Cleveland.

Retrieved from "https://familyguy.fandom.com/wiki/Rhode_Island_State_Prison?oldid=217183"
Community content is available under CC-BY-SA unless otherwise noted.